So, why not? Let’s start with the two reasons they may not get a trophy:

They didn’t earn it! You can’t expect to get a trophy just because the rest of the team did. Especially, when they got bumps and bruises and you didn’t! You didn’t mind being left out when it was time to put in effort and practice. You can’t just sit on the sidelines, not participate, not be active in the achievement, complain, and still get to celebrate as if you accomplished something, as if you worked hard for it. That’s like allowing dessert even though they refused to eat dinner. Nope-I can’t support that!

What does it say to my kids when the teams works hard, and they don’t? That they can just coast through challenges hoping somebody lets them share in their success? That they don’t have to really try as long as they align themselves with someone who is putting in the effort? That they can be a mooch!? Nuh-uh, not here! Success and achievement don’t just fall into your lap. It’s hard work. Even if you’re sitting the bench, you better be the best cheering teammate you can be. You need to be contributing something to the team. I’m aware that they won’t be 100% at this age, but they should be learning the concept.

Some organizations give out trophies to ALL the teams (win, loose, or draw). I totally get this for the first few years. It does help kids with breaking out of their shells, developing people skills and confidence (see, I’m not heartless). But, after awhile, it gets expected. Even the kids start to see that there’s no merit behind the gesture. As they get older though, I think we should set some standards for real achievement (even if it’s the parents stepping in).

Find what you’re good at, and work it!

As the parents, we have to be the ones to say “I could see this activity was a real struggle. Let’s try something new next time”. That’s what these young years are for…finding what they’re good at. Discovering something that will hold their attention and interest.

Also, the goal here is to begin shaping teams into groups of interested kids who want to work hard, and (GUESS WHAT?!) can actually deal with losing. Not everyone is cut out for every sport. Parents aren’t doing their kids any favors by forcing them to play when they really don’t want to. Because believe me, the committed kids on the team will start pointing out which kids are not pulling their weight. I’ve seen this happening as young as 5 & 6 years old.

You might think this is harsh, or that they’re way too young, but their early years is when it has to start. Achievement takes practice, and they’re gonna need all the practice they can get. We’re not doing them any favors by psyching them out and making them think they’re great at everything. They should be taught that rewards are not typically handed to you. I want to cheer my kids on and watch them grow their God given talent. Not eek by barely trying, or trying really hard to bring out something that’s just not in them. This is another setup for failure. We’ve explained this to the kids, and honestly, they totally get it. They have no interest in receiving a trophy they didn’t earn. So then I often wonder, is it us parents who really need to trophy?

Share with me-I’d love to know how you see it. 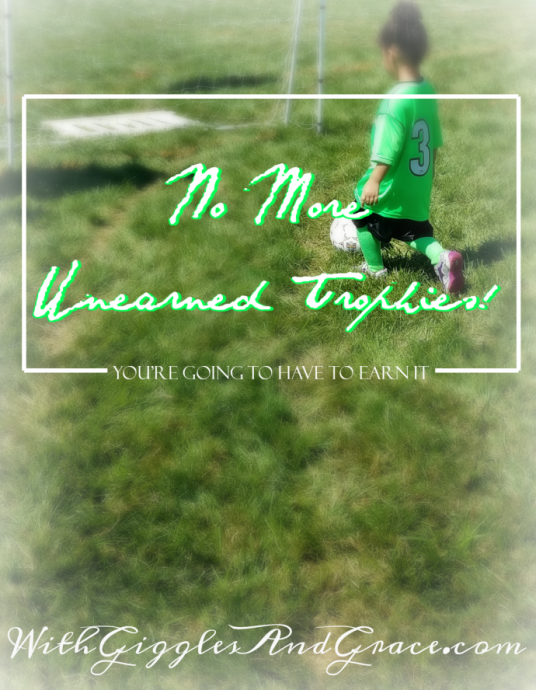