6 Lessons I Taught my kids about Prayer & the Holy Spirit

These can be pretty tough topics to grab ahold of, even for adults. So when I talk about these issues with my children, admittedly, it’s kind of for me too. Bringing the conversation to a simpler form is what I do to help lay a foundation for their faith to grow on. Growing up, I never really grabbed ahold of any foundation, so it’s good for me as an adult to sometimes take a step back and really be planted in my understanding.Maybe it’s his age, but my son’s been asking a lot of questions about God, among many other things. While driving, he began asking what it means to “hear” God. I could tell what he was tying to get to, but couldn’t articulate. So, I told him “you know, sometimes I feel like I’m talking to the clouds and God can’t hear me”. I told him this because I wanted to let him know that I too understood from experience what he was trying to say. Also, I wanted to confirm that what he was feeling was something that’s ok to talk, and be honest about.
He was happy to admit he feels this way too. I told him that when I feel this empty feeling, it’s usually a reminder, to me at least, that I need to draw near to God; that I’ve drifted too far away. I need to shut off the TV, phone, computer or at times even my own thoughts. I have to hide away for a stretch of time and reconnect with Him.

I explained that having a relationship with God is something that we should work at. That it’s just like anything else we choose to be intentional about in our lives, it takes effort. The remainder of the conversation was a weaving of questions and answers that went something
like this:

So, if you’re struggling to find connection with God or hearing His voice, I want you to know that you’re not alone. God isn’t calling on the phone leaving messages, it’s not like that. But, you should know that God is not limited to just words, sometimes we have to “listen” with our other senses. Sometimes, He speaks with perfectly timed words from others, sometimes it’s in a song at the right moment. Still other times, it’s the sense of knowing He’s in the room with us, or that peace you feel in chaotic situations. God does speak, He does move, but often we have to quiet ourselves and learn to identify His presence, His Holy Spirit, in new and different ways. We have to cultivate our senses so that we many encounter that still small voice that is God. 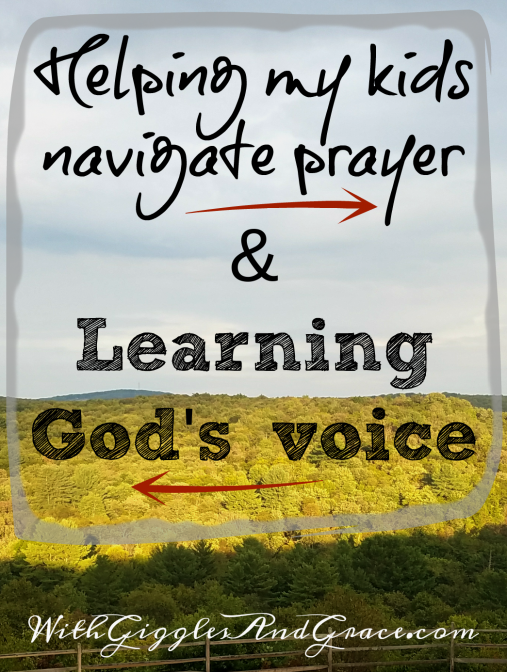 Apologizing to your kids-What it teaches them

She’s Chosen: Called out of the Bondage & Shame of Abuse

Help in navigating the “Fill Your Spirit” tab:

You belong to God. He created you on purpose and f

My head gets jumbled with thoughts, wants, emotion

From the radio we heard "What could wash me white

Prayer can sometimes take So Much Effort, especial